Surgical exploration for a patient with primary hyperparathyroidism reveals all four glands to be enlarged. What is the most appropriate treatment?

A
Biopsy of all glands

Surgical exploration for primary hyperparathyroidism starts with a Kocher incision. The thyroid lobes are carefully rotated in a medial fashion, and the inferior thyroid artery and the recurrent laryngeal nerve are identified. The superior glands remain more constant and are usually found along the dorsal surface of the upper portion of the thyroid. The inferior glands are more variable in location. If the inferior glands are not visualized after initial exploration, the thymus must be pulled up and inspected (see below image). 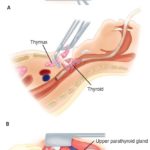 The operation for a single adenoma is resection of the affected gland. Primary hyperparathyroidism caused by four-gland hyperplasia can be treated by subtotal parathyroidectomy (3.5 glands) or total parathyroidectomy with autotransplantation into brachioradialis of the nondominant arm. It is vital to leave approximately 40 mg of tissue. In the event that three normal glands are identified, but the fourth parathyroid cannot be found, the upper pole should be mobilized and the entire dorsal surface must be palpated, as well as the retropharyngeal, retrotracheal, and posterior mediastinal spaces. The most common locations of ectopic parathyroid glands are shown in the image. 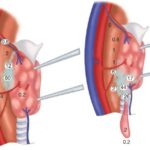 If it is a lower parathyroid that is not found, transcervical thymectomy can be performed and thyroid lobectomy can be considered. Sternotomy is not recommended at this point. Instead, the visualized glands are biopsied, the wound is closed, localization studies are obtained, and the patient is reexplored at a later date.

C
Excision of the largest gland